Is rained-on hay any good?

Is rained-on hay any good?

A lot of hay has been cut in recent weeks. The weather was good, but not perfect, as Kentucky weather is notoriously unpredictable. If you got some rain during haymaking, you are not alone. What happens to quality for rained-on hay?

The majority of the damage from untimely rains is the loss of soluble nutrients from the hay (the sugars). Even before rain damage, we lose some sugar during plant respiration that occurs from the time forage is cut until it reaches about 50% moisture content. Rainfall will extend the length of time that the hay is wetter than 50% moisture, leading to more loss of sugars from respiration.

Rainfall also leaches the soluble sugars from hay. The amount of leaching depends on the forage type, the hay moisture content when it rains, the concentration of soluble sugars and the number, amount and intensity of rainfall event(s). Leaf shatter can also be significant in legumes, especially on nearly dry forage.

Hay that has been rained on during curing will also have greater levels of dirt as well as higher numbers of microorganisms that will cause molding in the bale. Finally, the extra tedding and raking that may be needed to cure the crop can lead to further losses, especially in legume hay. Research done by Mike Collins, PhD, retired UK forage scientist, gives us some insight into the question of how much quality is lost due to rain. Collins measured the digestibility of alfalfa and red clover forage which experienced rain at different times after cutting (Table 1). In 1980, 1 inch of rain that fell soon after clipping had little negative impact on forage digestibility. In a second study, 1.6 inches of rain during curing (after some drying had occurred) caused significant losses in digestibility.

Getting 2.4 more inches of rain on almost dry hay caused further damage, truly making some of the forage of little value (for example, 36% digestibility in rain-damaged late-bloom alfalfa). With severely rain-damaged hay, it may better to leave it on the field, chop it up with a rotary mower to speed decomposition and minimize shading of the next crop. 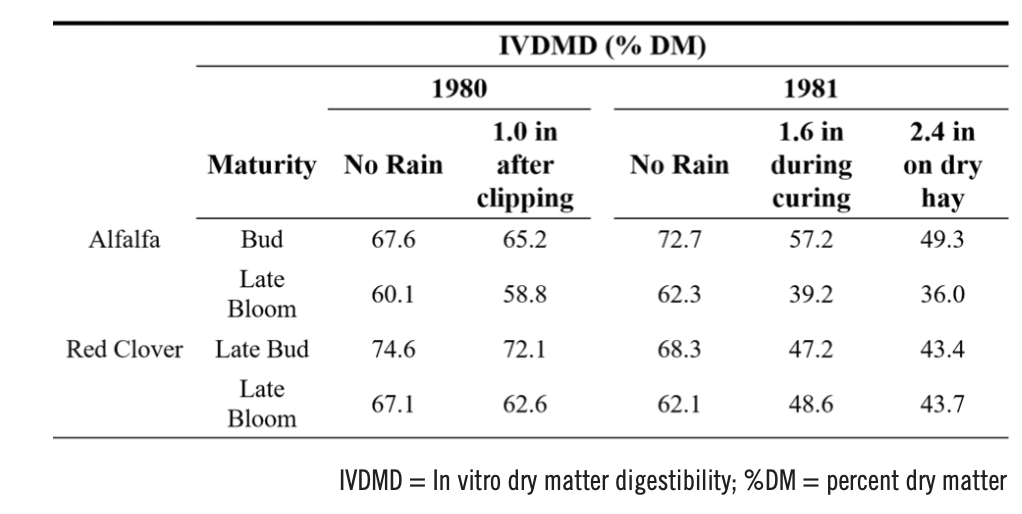 Similar research at the University of Arkansas found dry matter losses were below 2% for second cutting orchardgrass with up to 3 inches of simulated rainfall when the forage was 67.4% moisture (moisture level just after cutting). Dry matter losses quadrupled to 8% when the same amount of water fell on forage at 15.3% moisture (moisture level desired for making dry hay).

In the end, deciding what to do with rain-damaged hay is a judgment call. Many factors come into play such as when the rainfall occurs during curing, the amount and intensity and how dry the crop was when rained on. I find it helpful to know that rain immediately after cutting can do minimal damage.

Jimmy Henning, PhD, is an extension professor in the Department of Plant and Soil Sciences. This excerpt first appeared in the June issue of Famer’s Pride.

© 2022 University of Kentucky, College of Agriculture, Food and Environment. All rights reserved.